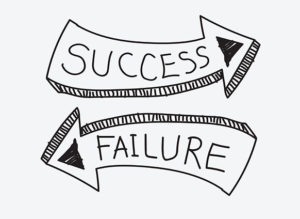 Failure is the stepping stone to success..
What does it mean? What does success really mean? Success is opposite to failure… We use these words not just for situations, even for people..
He is successful, he is a failure..
I even heard someone say, ‘He is a failed entrepreneur’
What does it mean? If an experience results in an outcome not seen by others as successful (according to the criteria set by some) the person has failed as an entrepreneur? Isnt it just an outcome one is happy or not too happy about?
These questions with regard to these words keep coming up for me when I talk to people.
In one of my sessions a teenager said, ‘if I don’t get into IIT I am a failure. ”
And I asked her, so, if you get into IIT and fail your exams then are you a success or a failure?
Of course, that question was answered with a blank look and after sometime came the answer’ failure’..
That would mean in one’s life, one is constantly thinking in terms of failure and success depending on an outcome which in reality is just an experience.
It is hard for me to imagine living such a life.
What defines success or failure? Who defines it (others)??
If I don’t get into a university I want, am I a failure or if the person I love does not love me back, am I a failure?
On one hand we celebrate only achievements or success as we call them and on the other we tell people to be open about the failures and celebrate that too .  These are conflicting messages that children and adults are getting and very confusing too.
These words are only damaging adults and children by labeling them which in turn is stopping them to look at themselves as evolving individuals.
It’s time to focus on the process and the outcome as an expected or unexpected outcome. Its time to look at experiences as they are, instead of making it about the outcome which others determine it as success or failure.
It is  time to re-look  at the language we are using to understand our world?