The poster says it all 🙂 Children were gently and at times strongly pushed to think in different angles and perspectives. It helped them to get a wider view of the world around them. Thanks to Mathangi Rajasekarn for taking such efforts and present them with a module of “Creative thinking”. More to follow so better to register your child’s name for the next program.:-) 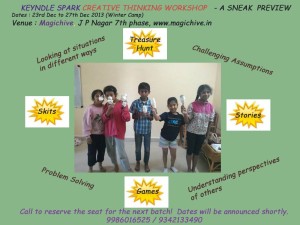 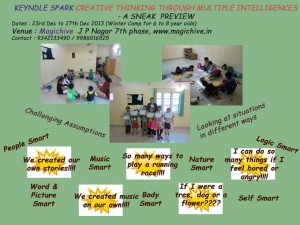 while being taken on a journey of creative thinking. Here is a snapshot of the journey.

Natural Intelligence: Children were taken on a nature walk where they observed different types of

leaves, rocks, trees, insects and even clouds! They went on to become one of the elements of nature

and created a story board of the same.

Intrapersonal Intelligence: A story was narrated on how to be aware of one’s feelings and what action

can be taken on that. Children created their own”feeling wheel” and “action chart”

Musical Intelligence: Children created rain and thunder effect for a story about a boy who wanted to go

out on a stormy day. Another story to introduce musical instruments was narrated to them. They

Linguistic Intelligence: Children created their own story boards using pictures given to them. It was

demonstrated to them as to how different stories can be created using the same set of pictures.

Kinesthetic Intelligence: Children explored acting to communicate with each other. They explored