Children ages 11+ enjoyed a session on the Cosmos taken by Parthasarathy, who took the initiative to share his interests with the children. Objective was to create a curiousity in them to imagine, explore and go beyond their textbooks. The feedback was great, as children wanted more of these sessions. They liked the interactive method in which the session was taken. Though, the Bangalore skies did not allow for any star gazing, it was an enjoyable session. Many more to follow. 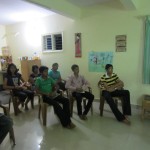 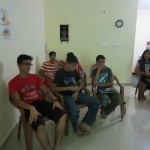 A feedback given by Vinay a participant:
Yesterday I attended a talk on the topic”Cosmos” and it left me hungry for more. Thanks to Partha Uncle I learnt a lot more on not only astronomy but also the timeline of the earth than I had ever learnt in the past 13 years. The least I could do was say thank you for the class but is that all I can do for someone who opened my eyes which now look beyond the sky. Here’s a poem on yesterday’s journey through space and time.

Journey through Space and Time

From the rains and lakes of methane on Titan
To the bold step taken by Ferdinand Magellan.

From the retrograde motion of the planet Mars
To the infinite number of stars.

From the fascinating mission of Cassini-Huygens.
To the curious search for extra-terrestrial martians.

From the clusters and super-clusters of galaxies.
Ah!…Such fantasies.

Form the scary habits of black holes.
To the discovery of earth’s north and south poles.

This journey through space and time!
Was in every aspect sublime!